Brooks & Dunn were world-class songwriters who penned not only the majority of their own hits, but served as a creative wellspring for others. Nashville's party princes were also kings of country composing.

During their five-year climb to the top of the entertainment ladder, Kix Brooks and Ronnie Dunn became famous for their high-energy stage show, media wisecracks and rollicking personalities. 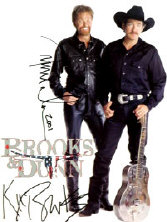 "There is a party element that people go for," admits Ronnie Dunn. "But I think there's a serious side," adds partner Kix Brooks. "The boundaries of country songwriting have expanded and I, for one, don't think that is dangerous at all. I don't think we had to stay in folk-music land. If you have a country lyric, I don't see what difference it makes whether you crank it up or rock a little bit on it. If the message is still there and the story is still something that people can relate to, then I think it's still a country song."

The Academy of Country Music's multiple Entertainers of the Year, the Country Music Association's five-time Duo of the Year, CMA Entertainers of the Year, and the men who sold more than 13 million albums are more sober when the spotlights are off. Long before stardom, Brooks & Dunn experienced the solitary lifestyle of the country song craftsman. Insiders on Music Row have long known of their "other" lives. Few were surprised when the team agreed to host the city's annual Harlan Howard Birthday Bash songwriters' fiesta.

Wade Hayes included a Brooks & Dunn song on each of his star-making albums ("Steady As She Goes" and "Our Time Is Coming," the former co-written by Don Cook, who produces both acts). In 1992, McBride & The Ride hit the country top 10 with Brook's "Sacred Ground" (co-written with Vernon Rust). Kix Brooks also provided hit songs for The Nitty Gritty Dirt Band ("Modern Day Romance"), John Conlee ("I'm Only In It For The Love"), Highway 101 ("Who's Lonely Now") and others.

All of that is in addition to the string of stirring anthems the duo wrote for its own rocket ship ride to fame. "Brand New Man," "My Next Broken Heart" and "Whiskey Under the Bridge," all co-written by the duo with Cook, are the sort of up-tempo romps that have helped define the "new country" sound of the '90s.

Dunn's solo composition "Boot Scootin' Boogie" was among the songs that ignited the country line-dance craze; yet he's also capable of plumbing the emotional depths of sad ballads like "Neon Moon" and "She Used to Be Mine," or celebrating his blue-collar pride with the rocking "Hard Workin' Man" and "Little Miss Honky Tonk."

"You can't ignore the realities of everyday life when you write," Brooks comments. "Average people is what country music is all about." And if that means dancing, drinking and carrying on, then that's what they write about. "Borderline," another Brooks & Dunn album, is one of the few in these politically correct times that dishes up the honky-tonk lifestyle in all its abject pain and unbridled joy.

Both men have the perfect voices for their creations. Kix Brooks brought a drawling, conversational quality to his "Lost And Found" (co-written with Cook) and a burning ember of regret to "You're Gonna Miss Me When I'm Gone" (Brooks/Dunn/Cook). Ronnie Dunn is simply one of the best country singers alive today, capable of the scorching tenor pyrotechnics of "That Ain't No Way To Go" (Brooks/Dunn/Cook) and "She's Not the Cheatin' Kind" (Dunn), as well as the more subtle moaning of something like "I'll Never Forgive My Heart," which he co-wrote with his wife Janine and songwriter Dean Dillon.

"It doesn't bruise my ego a bit that Ronnie is such a great singer," Brooks says. "I love to hear him sing and I'm glad that radio likes it as much as I do. In fact, on the album there's a song I wrote with Tony King called 'One Heartache At A Time.' I really liked it and played it for Ronnie to see what he thought. He said he thought it was a real good song. I said, '. . . if you really feel that way about it, sing it.' Ronnie can really sink his hooks into that kind of shuffle a lot better than I do. I'd rather him cut it than me."

Theirs was one of the most unlikely partnerships in Nashville. Kix Brooks is the natural-born ham who wrote songs for others on Music Row while waiting for his turn at the mike. Ronnie Dunn is the quiet introvert who made a living singing nightly in the smoky clubs of Oklahoma, while dreaming of the day he could make records. The thing they had in common is years of experience.

"It is weird, but I think if we had been a lot alike it wouldn't have worked," says Dunn. "We are so far the opposite in philosophy and personality. But we came to the table being as old as we are and knowing how to compromise."

"Both of us were probably right at the edge of giving up," Brooks remembers. "Having been in Nashville as long as I have, I've seen a lot of acts yo-yo up and down. I know how fleeting fame can be. As a result, I think we both approach the business end of what we are doing with a pretty cool head. And we definitely don't take anything for granted."

"My dad was a fanatic country fan," says Dunn. "It was like our religion: We were country music fans and then we were Baptists." Ronnie Gene Dunn played in bands as a teen, got kicked out of a religious college for performing in honky-tonks and settled in as a local hero in Tulsa's nightspots. He recorded for the city's Churchill Records label in 1983-84. Drummer Jamie Oldaker (now of The Tractors) entered Dunn in the Marlboro national country talent contest, which he won in 1988. This led to his first Nashville recording sessions.

Louisiana native Leon Eric "Kix" Brooks grew up in Shreveport, just down the street from country legend Johnny Horton. He cut his teeth as a performer in the bars of New Orleans. Brooks came to Nashville in 1979 and was soon writing tunes for Crystal Gayle, Sawyer Brown, the Oak Ridge Boys and other acts of the day. In 1983 he recorded singles for the little Avion label. They failed. In 1988 he issued a solo album on Capitol Records. It failed, too.

Both men were after new solo recording contracts when they made tapes for Arista Records in 1990. Label chief Tim DuBois heard something in their different styles that he thought would mesh. He introduced them over an enchilada lunch. At his suggestion, they co-wrote and did some recording. When they submitted the result to him, DuBois said, "That's what I thought, fellers. If you want a deal together, you got one."

"Ronnie and I just kinda looked at each other," Brooks reports, "then we said, 'Yeah'." Neither was in a position to turn down offers of any kind.

Dunn was still living in Oklahoma: "I remember driving back and forth from Tulsa to Nashville all the time. We had a Ford Explorer and I put 100,000 miles on it that year. In 1991 I heard 'Brand New Man' for the first time on the radio while I was coming into Nashville. That was one of the last trips." The single hit No. 1 that fall and the Dunn family moved to Music City.

The follow-up, "My Next Broken Heart," was the first song Brooks & Dunn wrote together the day after DuBois had suggested the collaboration. It, too, went to No. 1. So did "Neon Moon" and 1992's "Boot Scootin' Boogie," which was one of the songs Dunn had won the Marlboro contest with. "Brand New Man," the duo's debut album, sold five million copies. "Hard Workin' Man," the 1993 follow-up, sold four million. "Waitin' On Sundown," the 1994 Brooks & Dunn collection, is now at double Platinum. "Borderline" is already near the same mark.

Their shows were wild celebrations of "new country" merriment with Brooks rampaging all over the stage and Dunn transfixing listeners with his electrifying voice. A variety of amusing high-tech gadgets added to the circus atmosphere.

Despite their prowess as songwriters, several of their biggest records came from outside the team. One of Kix Brooks' finest performances was 1994's "Rock My World (Little Country Girl)," written by Bill LaBounty and Steve O'Brien. The duo created a sensation this year with Dunn's hair-raising revival of "My Maria," written by Daniel Moore and the late B.W. Stevenson.

"The country music market is changing. All of these young people have come over to us. And maybe there's a fickle element to that," says Brooks.

Says Ronnie Dunn, "If an act was ever flying by the seat of its pants, we were. We walked into this together just as tentative as anyone else. We worked with one another because it just felt natural." And Kix Brooks concluded, "Why this combination worked, I don't know. But I'm glad it did."

Brooks & Dunn may be available for your next special event!